I Remember Most What Never Happened sees the graduating cohort of artists from the BxNU Master of Fine Art course exhibit at BALTIC 39. This unique two-year course is run by Northumbria University in partnership with the BALTIC Centre for Contemporary Art and uses the vibrant studio culture of BALTIC 39, in the heart of Newcastle City Centre, to encourage development through practice-based learning and critical reflection.

Post-exhibition, Andrea Allan caught up with five of the ten graduates to discuss the impact group critiques and feedback given during the course had on their practice. The following questions focus on the overlaps in theory, themes and perspectives, exposing an often-overlooked part of artistic practice.

[C8]: Could you give an overview as to how critiques are run on the course?

[Grace Denton]: With the critiques you get a lot of input, feedback and opportunities to develop your work. Each semester we get two critiques, the first one is with tutors but sometimes BALTIC 39 residents are also invited. In the second semester BALTIC curators participate, it’s really good to get their perspective as obviously they come from a completely different place and angle.

[Frankie Casimir]: They always relay it back to BALTIC, all of their suggestions come from artists that they’ve worked with and exhibitions they’ve curated.

[GD]: They try and give you feedback as if it were an exhibition they were curating.

[Julie Bemment]: In the latter part of year two you get to direct the conversation, whereas before other people looked around and gave you feedback. You can say this is the situation I’m in and what logistical and practical issues you’re having. It gives you more control. When I was getting near the final show I was full of questions: my work was growing and I had a scale issue, I threw it out to everyone—tutors and BALTIC curators—and they gave me useful feedback.

[C8]: Were there any themes and theory that you discussed that overlapped?

[Elizabeth Black]: Probably some that are overarching, common interests like essentialism, feminism, Marxism, other ‘isms’, etc., in terms of relating to one another’s practice.

[JB]: We work together, we share information, we have our own practices, but then there are these overlaps that are naturally occurring over the two years.

[FC]: There was the large exhibition space and then there was the colour and that was the two underlining themes in the work. There’s the balance between scale and colour; how that colour exists within the format of the show. I think that’s what made it successful and feel more like a group show than divided space for each artist. 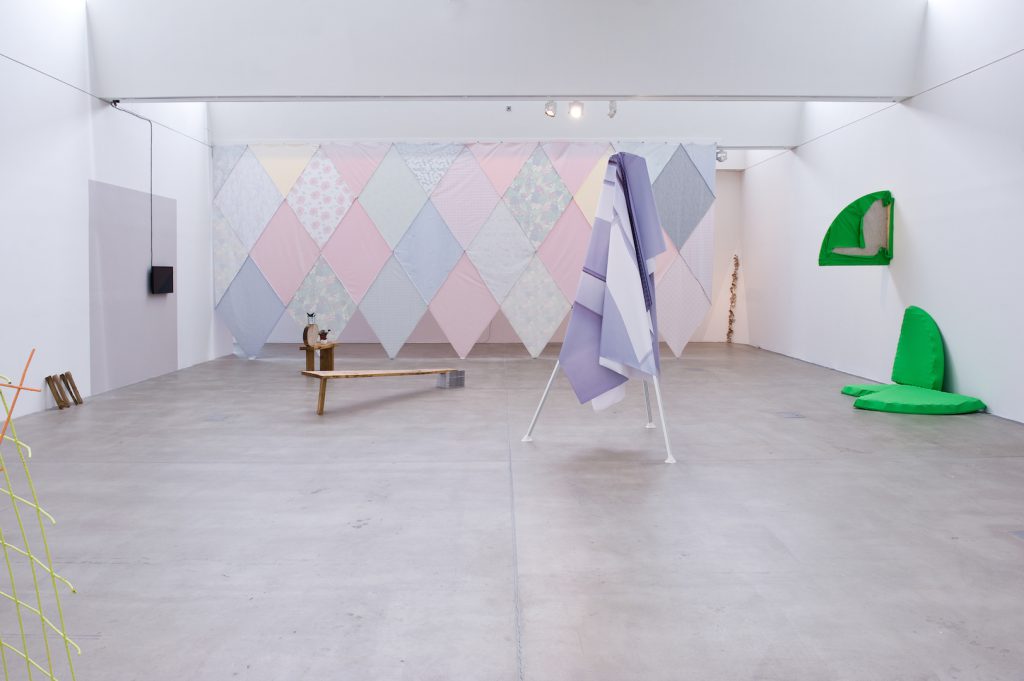 [C8]: When viewing your degree show I felt that it was a cohesive exhibition—difficult with a degree show—and the work flowed together.

[GD]: We were all open to having things mixed together: we weren’t protective of our own areas and remained open to each other’s ideas. My curtain blocked off the majority of the gallery, but because I came to everyone with a really solid idea everyone could imagine that and saw the advantage of having something really striking as soon as you come in, then it’s more muted as a backdrop to everything else. It is inevitable over the years that we all fed into each other; you develop certain ways of working.

[FC]: You understand each other. I think that’s really important; that as a group you understand what other people want and what you can give through that understanding.

[C8]: Was there any point that you held your own critiques without tutors or someone from BALTIC?

[SJ]: A couple of times. The first time was during test bed.

[GD]: There’s a thing Melissa MacPherson started which was called Slice, where everyone in the BALTIC community were invited and anyone could pitch something to test it out. It was peer group orientated, but she invited people from Northumbria’s main site as well, it brought some of their BA students over, which was really good as they were able to interact with us too.

[JB]: I once took people across to The Newbridge Project and used their PH Space to record conversations. It brought together people not just from the BxNU MFA course, but also PhDs and the duty manager from the main BALTIC 39 building. It opened discussions up beyond just us and got everyone in the building involved.

[C8]: Were there any other organisations that got involved other than BALTIC?

[SJ]: It’s quite vibrant in BALTIC 39 so you see people coming in and out a lot. I don’t know about direct links but there were people that were connected with other groups.

[GD]: People are really generous, if they have a connection with someone and they know you’re after a certain space or person to help with something then they will share that with the group. We did an interim show at Vane gallery that was entirely set up by one of our tutors who has a really good relationship with them and knew they had a gap in their program. That’s not something that we could have arranged on our own. When our graduate exhibition was up we had a critique with two external curators organised by the tutors, one from the Scottish Gallery of Modern Art in Edinburgh and then a gallery in London, it’s a really good connection to have.

[EB]: The course itself provided so many opportunities—particularly studying on exchange in Stockholm, that really pushed me in terms of my knowledge of international contemporary art. Without the course, I wouldn’t have made those European connections and the amazing experiences I had.

I Remember Most What Never Happened, BxNU MFA Graduate Exhibition, BALTIC 39, Newcastle upon Tyne, 31 May – 18 June 2017.

More information about the BxNU Master of Fine Art course can be found on the Northumbria University website and the BALTIC 39 website.

Andrea Allan is an artist and writer based in Newcastle upon Tyne.

Published 12.07.2017 by Christopher Little in Interviews