Maybe it’s true that sculpture is ‘making poetry with solid objects’, as Edward Allington said in 1997. But it can also be something more like a trick or a puzzle, using form and object to work through a logical problem. One of the first works to meet the viewer in the Henry Moore Institute’s breathless exhibition of the work of the late sculptor Edward Allington is ‘Ideal Standard Forms’ (1980). Here, nine geometric sculptural forms are arranged on the floor in a square shape. Each one represents some Platonic ideal of a shape, but the objects are clearly handmade. Allington made his sculptures in clay, then coated them with plaster, digging out the clay original then throwing it away, so all that remains is a ghost of the shape’s true form. It would not be strictly accurate to describe the resulting shapes as charmingly wonky, which might imply a folkish, homespun charm. Instead, they are heartbreakingly close to machine perfection, which is to say that they are only as perfectly rendered as they could have been while still being handmade. They carry within them the limitations of that specific caveat; the gap between nearly-perfect and actually-perfect is tiny and huge all at once, insurmountable still. Each wabi-sabi shape is suffused with effort, striving for this Platonic perfection, but the relationship of these shapes to mass production is like a horse trying to outrun a car. In an accompanying sketch, diagrams drawn free-hand float pure white against graph paper, like schoolboy doodles shaded in an exercise book, as though they had been filled in neatly with Tipp-Ex at the back of the class.

Classical forms and motifs frequently recur throughout Allington’s work, but in decontextualized ways that suggest, variously, an architectural salvage yard or a Parthenon souvenir shop. If a figure moves through these works, it seems he might be a giddy autodidact with a boyish enthusiasm for Ladybird classicism, flitting excitedly between civilisations. Various works riff sardonically on the tourist gaze; in ‘Victory Boxed’ (1987), ninety-nine headless winged plaster souvenir figures are arranged in a Greek flag formation. Nearby, Heraclitus provides a motivational quote. Elsewhere, plaster mouldings, Ionic column details, and elaborate cornicing are presented absurdly out of context; causing us to trip over our own reverence and desire to own and reframe objects away from their natural habitat. Allington remains conscious of his own role as a tourist, as an interloper. Upstairs in the exhibition, sneaking over the bridge into Leeds Art Gallery, a suitcase has fallen clumsily open onto the floor, spilling its contents of plastic joke-shop sushi and noodles. We feel we need to possess everything, but we can’t, and we shouldn’t.

For ‘Decorative Forms Over The World’ (various dates), Allington took a series of trompe l’oeuil MDF classical decorative forms around the world, taking pictures of them in hotel rooms and touristy spots – an offline meme reminiscent of the popular ‘Travelling Gnome’ trope from various TV shows. The forms’ adventures are documented in a slide show of snapshots, as though the forms took a little holiday from function, and now want to show off about it to the neighbours. When these trick ornaments appear in everyday contexts, or in incorrect historical contexts, they are decoupled from whatever functional structure they may once have accompanied. It neutralises their cultural power and the object becomes dumb, purely decorative, silly and cute. Decontextualising, even anthropomorphising, classical details in this way is oddly democratic, representing a levelling of these rarefied structures – they can travel to Egypt, same as you, or to the temple of Poseidon, to a random park bench, or just hang out in a hotel room between the minibar and the TV. 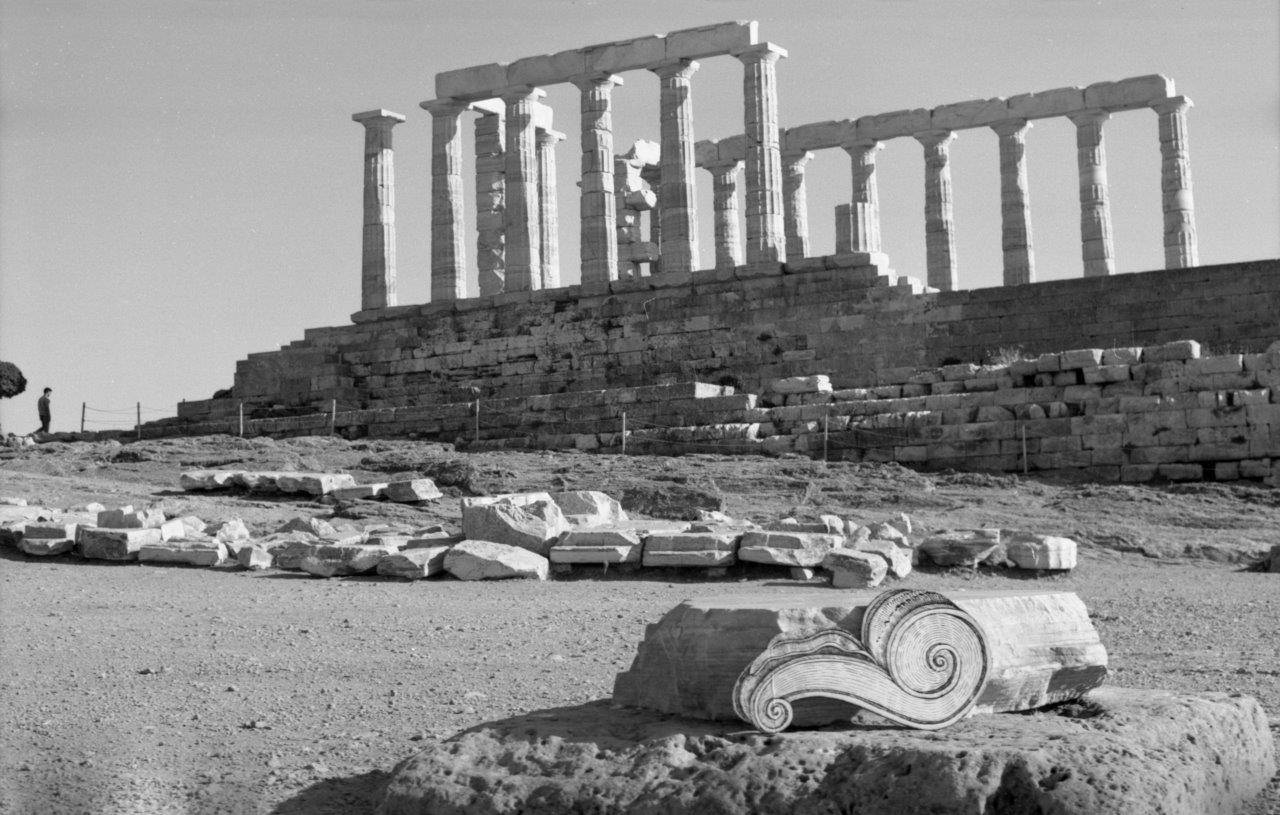 Allington’s work is mercurial in its humour, rooted in education but never dry or didactic, and always leaving things, indeed, unsaid. For Susan Sontag, camp was the result of ‘a failed seriousness’, but there’s an inverted, wholesome, humour to the works here, which shows us what can happen when a joke lands seriously, and how that can reveal a truth.

Tessa Norton is a writer and artist based in West Yorkshire.