What are the universal parallels between protest movements? And, what can artists learn from each other about harnessing the power of culture and creativity for social impact? These questions are central to an eclectic new group show at Artlink Hull.

The exhibition is dense, vital and weighty. Big ideas and untold stories are laid bare, bold social movements are reinterpreted and brought together in one small space to try to understand and lend shape to intercultural dialogue.

Footnotes on Equality comes from an unusual collaboration and long process. It was created by fifteen international researchers as part of the European Commission-funded project Gender and Cultures of Equality in Europe (GRACE). It brings together art, everyday objects and ideas that speak to the cultural productions of (in)equalities across Europe.

In their gender research throughout the EU and worldwide, the researchers have encountered ongoing struggles that social movements and activists encounter when building meaningful equalities at community level or seeking to effect government policy and legislation. For this exhibition they have gathered together artworks, documentation, objects and ideas that act as vehicles for storytelling, demonstrating the ways in which inequalities are both experienced and resisted.

A good place to start with the exhibition is the poster ‘Polish Women on Strike’ (2016). Designed by Ola Jasionowska, and contributed by researcher Tommaso Trillo, it was made in protest against the Polish government’s attempt in 2016 to pass legislation to make abortion illegal in all circumstances. Tens of thousands of women and men mobilised, taking to the streets of Warsaw. This powerful poster urged people to join the rally, which resulted in pressure that forced the government to discard the new legislation. This was a substantial victory for direct action, however, the fight for women’s reproductive rights still rages on, as abortion remains illegal in most cases in Poland (except rape, incest, or when the pregnancy poses a serious threat to a woman’s health).

The Polish protests inspired a similar event in Ireland, the Strike 4 Repeal in 2018, to repeal Ireland’s Eighth Amendment, which banned abortion in nearly all cases. Not for the first time and not for the last, transformational changes in one country inspired millions of others to take action. This is how a protest around women’s issues and civil rights can spark a movement towards equality that is felt globally. 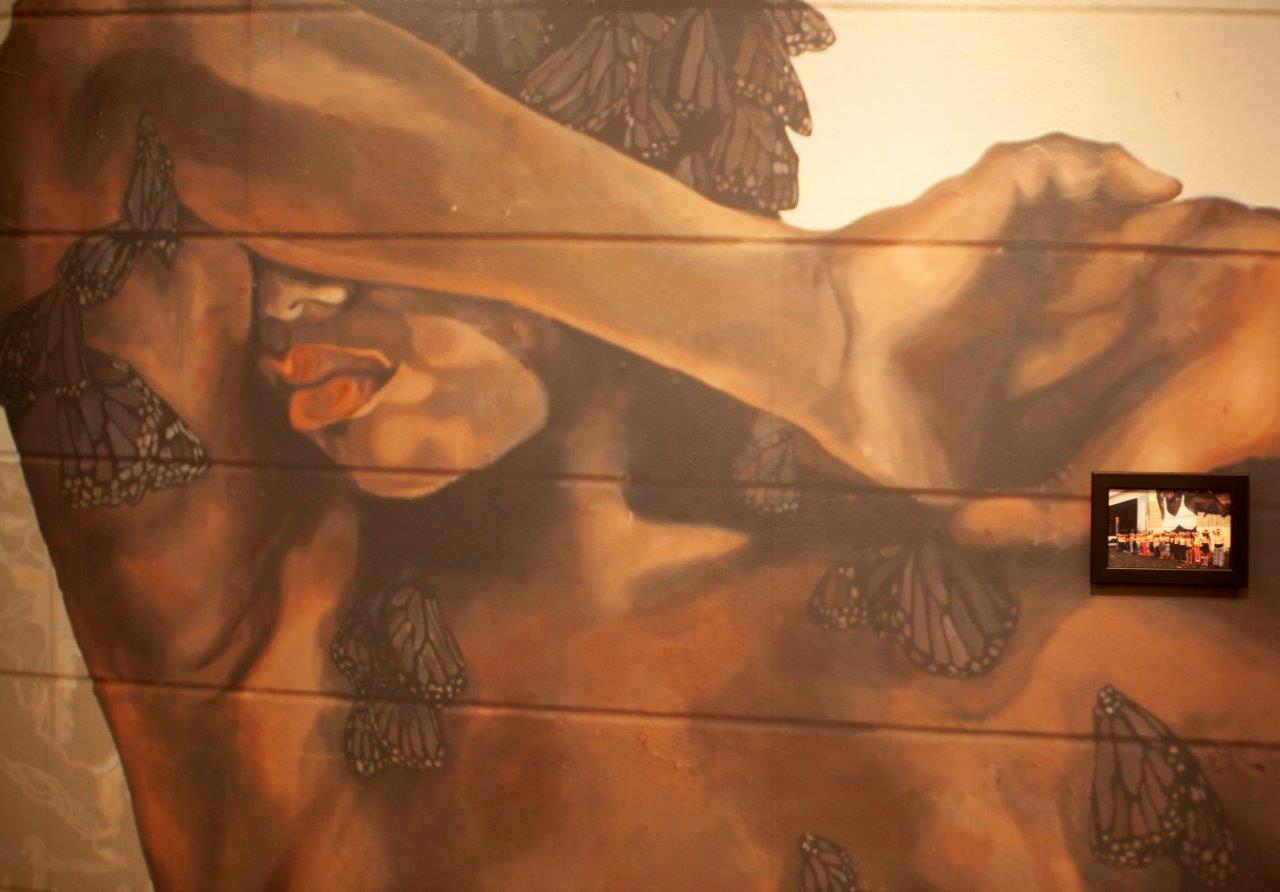 A striking image of the mural ‘Paz Para la Mujer’ (2016) takes movements towards equality in a new direction. This beautiful and delicately drawn mural has real power. Painted by Moriviví Collective in San Juan, Puerto Rico, documentation of it was contributed to Footnotes on Equality by researcher Wilmarie Rosado Perez. Moriviví is a collective of young female artists, based in Puerto Rico, who create murals that give visibility to social justice issues. The mural shows a nude black woman hiding her eyes behind her arms, with butterflies covering her body. Painted in 2015 as a collaboration with an anti-domestic violence organisation of the same name to call attention to gender-based violence. The butterflies have a symbolic meaning, representing three Dominican sisters, the Mirabals, who are often referred to as ‘las mariposas’ or ‘the butterflies.’ The sisters were murdered by dictator Rafael Trujillo in 1960, sparking the International Day for the Elimination of Violence Against Women. The event that sparked a movement – like the theory of the butterfly effect – a butterfly flaps its wings, causing unpredictable and untold effects both locally and on equality movements around the world. 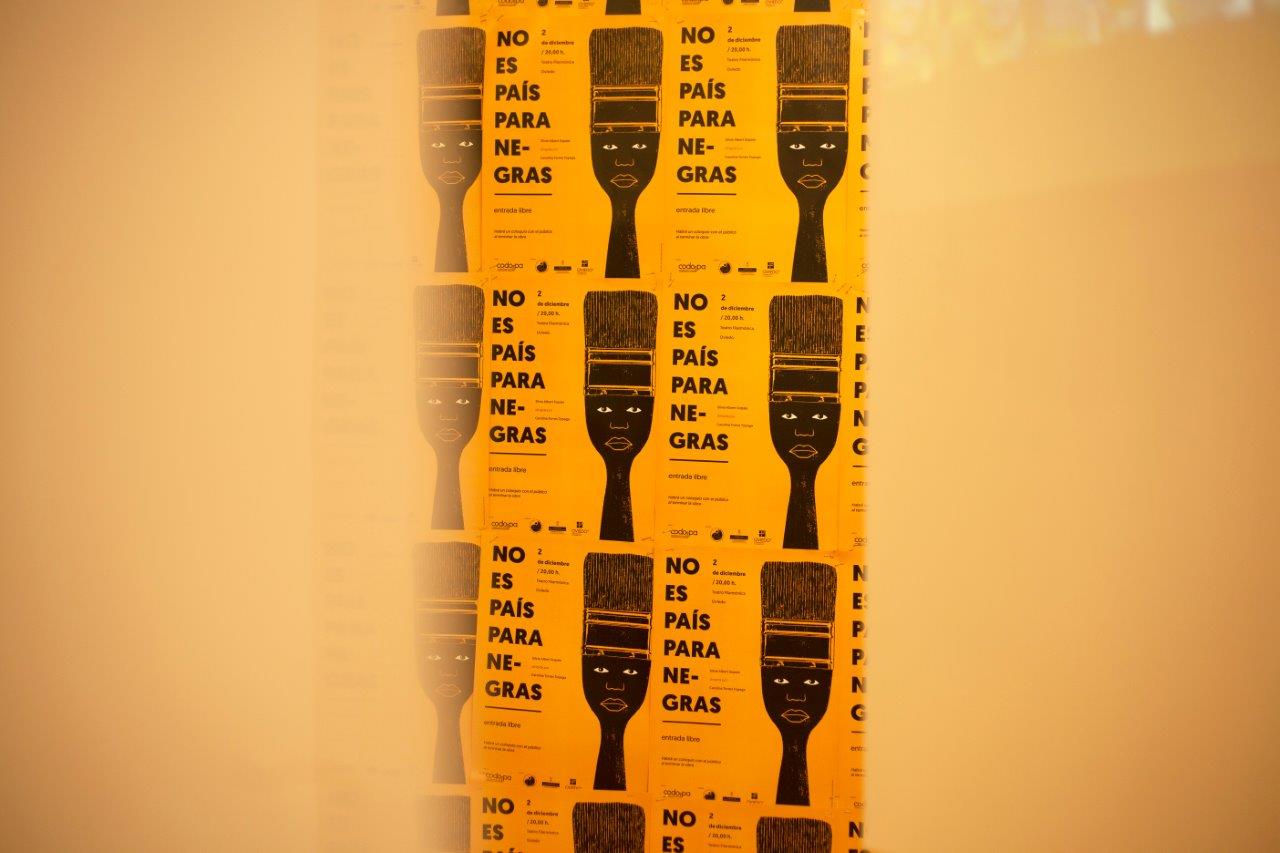 Designer unknown, ‘No Es Pais Para Negras’ (2016). Translated as ‘No County for Black Women’, a play by Silvia Albert Sopale.

Giving voice to the inequalities experienced by black women continues in the work ‘No Es Pais Para Negras’ (2016). Translated as ‘No County for Black Women’, this is a poster for the play of the same name by the playwright Silvia Albert Sopale. Focusing on the Afro-Spaniard community, the play premiered in 2014, becoming one of the first plays co-written and performed by a black Spanish woman playwright and actress in Spain. The poster design features a black paintbrush with striking blue eyes and African features, set against a mustard yellow background. It has been pasted up multiple times in the exhibition space, giving the impression of a legion voices, a growing movement with eyes staring out and confronting the viewer. Contributed by researcher Paola Prieto Lopez, the posters show the artist’s raw determination to open a space for black women artists in Spain and to make black female authorship visible.

‘Kontrapunkt’ (2018) is a simple but powerful series of cartoons by Amalia Alvarez, anti-racist activist and artist, which depicts the response to an influx of new arrivals, refugees from Afghanistan and Syria that arrived in Malmö, Sweden in 2015. Alvarez sheds light on the structural fluctuations that shape solidarity work in Sweden as well as those crucial inter-group solidarities between diverse groups and people that have arrived since. The delicate and fluid lines and ink washes of these drawings have a fragile beauty that underscores their political message.

With ‘Kontrapunkt’ and across the exhibition, it would have been helpful for the organisers to provide more context. For instance, curatorial text might have shed a light on the fact that ‘Kontrapunkt’ is Swedish for ‘counterpoint’, an organisation in Malmö that uses culture as a tool ‘by the people and for the people’, and that carries out extensive solidarity work in the form of emergency housing for refugees, folk kitchens and drop-in centres for homeless people. Often information about the specific political or social context of artworks in the exhibition feels underdeveloped, leaving visitors to fill in the gaps. It would also have been beneficial to be provided with interpretation drawing clear connections and parallels between artworks and social movements.

Amilia Alvares, ‘Kontrapunkt’ (2015-18), sketches on paper. Contributed to the exhibition by Tegiye Birey.

After spending time in the exhibition, it becomes clear that there is a special alchemy at the intersection of art and activism. Art can function as a way of engaging with and reinterpreting research, for embracing alternative perspectives, highlighting social issues, and building equalities through community. My takeaway from Footnotes on Equality as a whole, is that people have considerable power and collective agency when they act together, united by a shared set of aims, and that the influence and dramatic effects of such actions can be widespread beyond borders, time or place.

Lastly, I feel there’s something particularly poignant about this European-funded and European-themed exhibition opening in a predominantly Brexit-voting city (Hull), at a time of such political turmoil in the UK. There is a sense we are living through times of fundamental change and walking on shifting ground. Unknown challenges certainly lay ahead. I believe crucial lessons can be learned from this exhibition about the practices and processes of protest, and what can be gained in real terms from educating, agitating and organising.

Footnotes on Equality is open from 6 September  – 11 October at Artlink Hull. You can find out more about the Gender and Cultures of Equality in Europe (GRACE) project here.

Paul Drury-Bradey is a culture professional and writer based in Yorkshire.