Art galleries have always provided me with a respite from having to face the world full on, like a filter or lens that enables another viewpoint. Given current events I was particularly looking forward to visiting Gordon Dalton’s Dead Reckoning. Ours is now a threatening and fearful world; where every day just after 4pm I, among many others, check to see how many people in the UK have contracted COVID-19. In this context I would argue that we could all do with more stories and storytellers in our lives, if only to provide recess from the streams of ideologically driven data presented as objective fact. What Dalton does brilliantly is to start stories for others to finish off – the paintings present loose ends and unfinished sentences, provoking journeys into our eternally unsure selves with devices that spark familiarity, such as evocative use of colour, commonly recognised imagery, and a playful restructuring of traditional landscape composition.

Provocatively biographical titles such as ‘I’m sorry I didn’t mean it’ (2019) playfully compel a narrative reading. The paintings come across like chapters of a novel, but with no assurance where the beginning, middle, and end are to be found – I’ve entered this book in media res. There are some paintings within this show that could be seen as a group, communicating similar messages. ‘I thought I’d take a final walk’ (2017) and ‘It’s been so long since you went away’ (2017) from the first room, and ‘Blue Garden’ (2017) in the second room contain a muted sensitivity in that, even in the most crowded thickets of paint, veins of barely touched canvas poke through the quickly applied material, revealing themselves like rays of late sunshine gleaming through woodland in the final hours of the afternoon.

There are multiple stories being told here, but also none in particular. Dalton manages to pack layers of possibility into his works without requiring physical depth of painted matter. It’s tempting to think of the work of Frank Auerbach, in that the paintings on first glance look thickly applied because of the sheer mass of visual content, but on closer inspection, this is not quite the case. Where Auerbach has been said to embed time and meaning within the thick layers of applied paint on his boards and canvases, Dalton uses thinly, yet widely applied paint over a large area to produce a similar effect. The built environment is uncommon in Dalton’s work, but when it does make an appearance, it tends to dominate. My initial response to the heroic structure of ‘Monument to an invented age’ (2020) is driven by an overriding sense of familiarity of place for the artist, communicated through the soft and fluid handling of paint seen within the work. Speed of application remains, but sensitivity is picked up a notch with brush strokes that are more gentle, less brash, and a little more assertive than they seem to be in other paintings, communicating a sense of certainty and assurance. My cynical second reaction is one laced with feelings of irony and contradiction as I spend more time with the work, and I think this dual reaction is what makes these paintings so powerful – we never know quite what we are looking at, however familiar the imagery may at first seem. 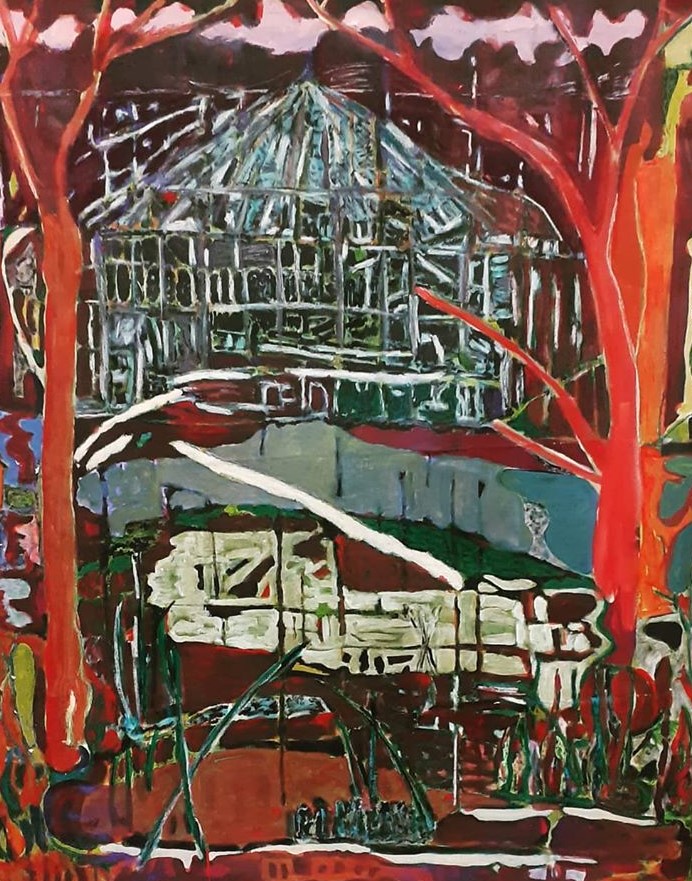 It seems as though Dalton disrupts the composition of his pictures to halt certainty in their reading. For example, ‘It’s been so long since you went away’ (2017) can be read as having four distinct horizontal panels that split the picture into sections, and yet these are broken by the pictorial element of trees that stretch from the bottom of the canvas to threaten the very top portion of the picture, where four mountainous peaks dominate. ‘Future Islands’ (2016) is disrupted differently, with some portions of the painting hinting at perspective and a vanishing point, whilst others remain flat and depth of field seems not to exist, giving this picture a lively viewing experience. Use of colour reinforces this reading, as metallic blues and reds contour areas of subtly mixed earthy pinks and ochres, alongside mossy greens. The contradictions of technique at play here seem to manifest a changing and changeable idea of landscape imagery.

Elsewhere, the use of colour continues as a main driver for sense-making. ‘I’m sorry I didn’t mean it’ (2019) contains the motif of the umbrella, familiar in this show, but the colours have moved from the aquatic greens and tipsy yellows found within ‘If I could get my wasted days back, would I use them to get back on track?’ (2020) to doom laden heavy magenta and ominous orange-black. The slim corridors of light present in this work tell us that it is set in daylight, but the mood is dark, bringing to mind a slender ray of brilliant light, peeking through the door ajar in a windowless room. ‘Will the night last forever’ (2016) is evocative of a rich tungsten twilight; deeply approachable cerulean blues alongside inviting viridian and warm pink, all contribute to a picture full of warm memories and lasting nostalgia. ‘Will the night last forever’ is like one of those magical evenings, experienced almost as memories even as they are happening in real time – arousing an urge to be in the past, present, and future at the same time. The horizontal line that cuts across close to the centre of this painting strongly hints at a lake – although we can never be certain – making for a traditionally picturesque composition bathed in moonlight with shimmering graphite hills. We might normally expect to see these objects reflected in the lake, but instead here we see a huge variety of visual phenomena. Swirling shapes in warm orange, found beneath the large trees to the left and right of the composition hint at these trees being reflected, but not quite how we might expect. There seems to be another level of consciousness at play, whereby the objects that are reflected in the lake are of another place, evoking the effect of nostalgic transportation wherein we can be rooted in the present, yet longing for it, as if it was a memory. 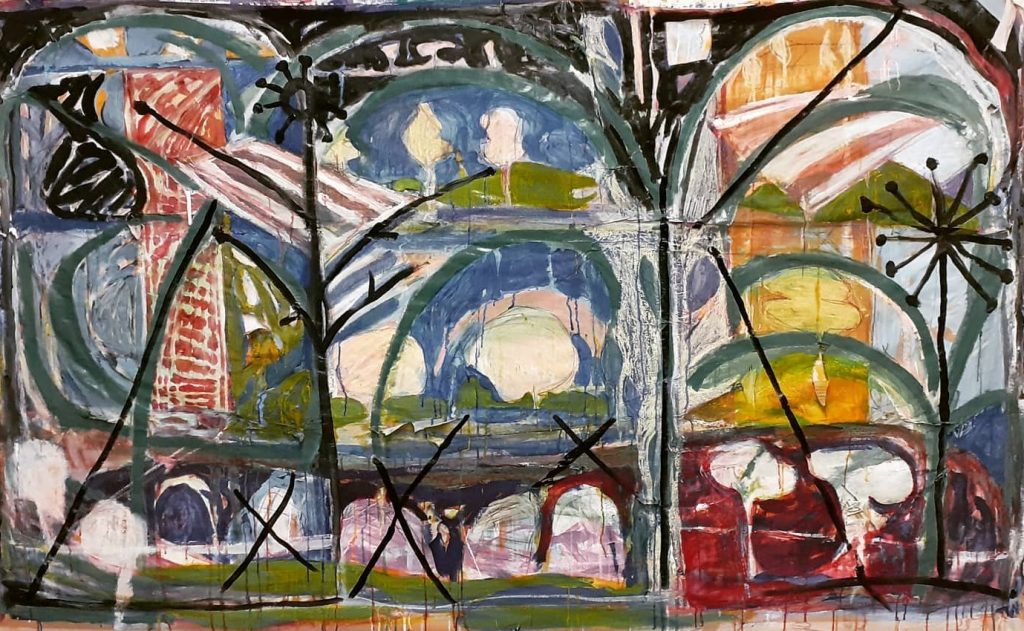 If these paintings are as emotionally charged as the titles suggest, there may be a certain sort of self-indulgence involved in their creation – an opportunity for the artist to wallow in reflection. I think this emotional indulgence is projected onto the viewer and back again in these highly reflective scenarios; as I try to make sense of some of Dalton’s provocative imagery, I use the catalytic titles as opening sentences to my own paragraphs. The works in Dead Reckoning invite participation, and a two-way conversation, with the level of participation changing from painting to painting. In some, such as ‘I thought I’d take a final walk’, ‘It’s been so long since you went away’ and ‘Will the night last forever’, there is a sense of exploration and cerebral journeying, through inviting colours and the contours of painted corridors. Other works such as ‘I said something I did not mean to say’ (2019) and ‘Future Islands’ invite stillness, and a more silently reflective response; less about traveling through, and more about sitting within and ruminating on a scene. There is a difference between looking at landscapes depicted in pictures and actually being in them, but these paintings operate on the boundary between those differences through their ambiguous provocations and loose ends, or unfinished sentences. Here, there is a sense of remembering, longing, and desiring, combined with warm familiarity and adventure. In many of these paintings it feels as though Dalton is nudging the viewer into his own mental space, which is variously lined with a veneer of quixotic heroism, hopeful optimism, mournful regret, or a tinge of melancholic nostalgia.

Neil Greenhalgh is an artist and writer based in Greater Manchester.

This review is supported by The Auxiliary