Everyone knows that Disney’s The Lion King is based on Shakespeare’s Hamlet. Fewer know that The Lion King III: Hakuna Matata, otherwise known as The Lion King 1½, also adapts a play. This third (or one-and-a-half-th) film in the series relates the events of the original, but from the perspective of Timon and Pumba, just as Tom Stoppard’s Rosencrantz and Guildenstern are Dead shows Hamlet’s two friends during their ‘off-stage’ moments. Both the Disney film and Stoppard’s play use this backstage-zone as an ironic vantage point from which to view the structures of social hierarchy and the human (or Leonine) condition. Both are funny, both are tragic, and both have at their core a manner of using the fundamentals of a ‘built’ environment against itself, using and resisting and subverting the structure of the original story.

“…that you desire nothing that you fear. Everything…”

On walking into Jasmina Cibic’s current exhibition at the BALTIC, you’re confronted by a large mural-painted wall. To the left and right are two circular cast-iron structures with texts that read “Everything that you desire, nothing that you fear”, and “Everything we do today will look heroic in the future”. The fact that the words run in a circle means it’s really a matter of chance where you begin reading, and the experience of re-codifying the sentences through different meanings and formulations before landing on the ‘correct’ one is an unsettling experience. If you read it ‘out of order’ the first time, it feels as if the sentence grows out into the world from some backstage zone or corridor, round which you have to walk to link back to the start. Like walking off stage-right and re-entering stage-left. It feels like exactly half of the sentence’s ‘world’ is hidden from us, like the dark-side of the moon. As the tagline from The Lion King III says, “You don’t know the ½ of it”. 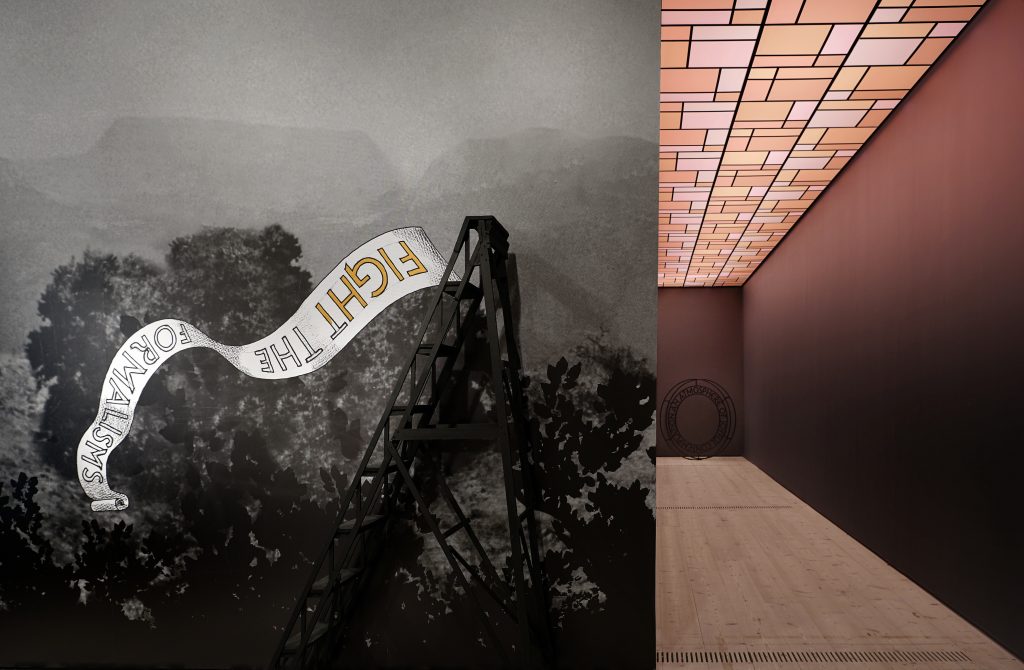 “…today will look heroic in the future. Everything we do…”

Every wall ever built suggests its own future state as a ruin, its past state of ‘not being there’. A wall is a literal and symbolic form of socio-spatial division, and yet it also immediately provides a surface for resistance and self-expression. That’s why we write graffiti, hang ‘art’. As a unifying target for the revolutionary impulse, it does and undoes itself. It’s a wall’s detached relationship with its own status as ‘surface’ that Cibic activates in her mural, ‘Show the Land in Which a Wide Space for National Progress is Ensured’ (2015). Photographs of Yugoslavian landscapes are overlaid by chillingly platitudinous quotations “collected from speeches on nation building”. The wall conditions you and locates you, forcefully and rhetorically, as you exit, either stage-left or stage-right, into an eerily-lit corridor, drawn forward by swells of sound and music into the main rooms of the exhibition.

“…of joyful contemplation. An atmosphere…”

Another iron-ring sculpture in the corridor proclaims, “An atmosphere of joyful contemplation”, which is actively sinister and dishonest, whilst you’re led to the three rooms which house Cibic’s film-triptych, ‘Nada: Act I’ (2016), ‘Act II’ (2016) and ‘Act III’ (2017). The large screens bisect the rooms. You can walk around them into a backstage-zone, and see the images mirrored. In part one, the musician Dejana Sekulić ‘plays’ a model of Vjensclav Richter’s design for Yugoslavia’s 1958 Expo Pavilion like a stringed instrument. Looked at one way, the building is now a ‘violin’. Looked at another way, it is being ‘violated’. It’s an uneasy experience, perhaps involved more with statement-making than ‘aesthetics’, playing around with that strange high-modernist, Eastern-Bloc tension between Art and Architecture, the building and un-building of nations, identities. 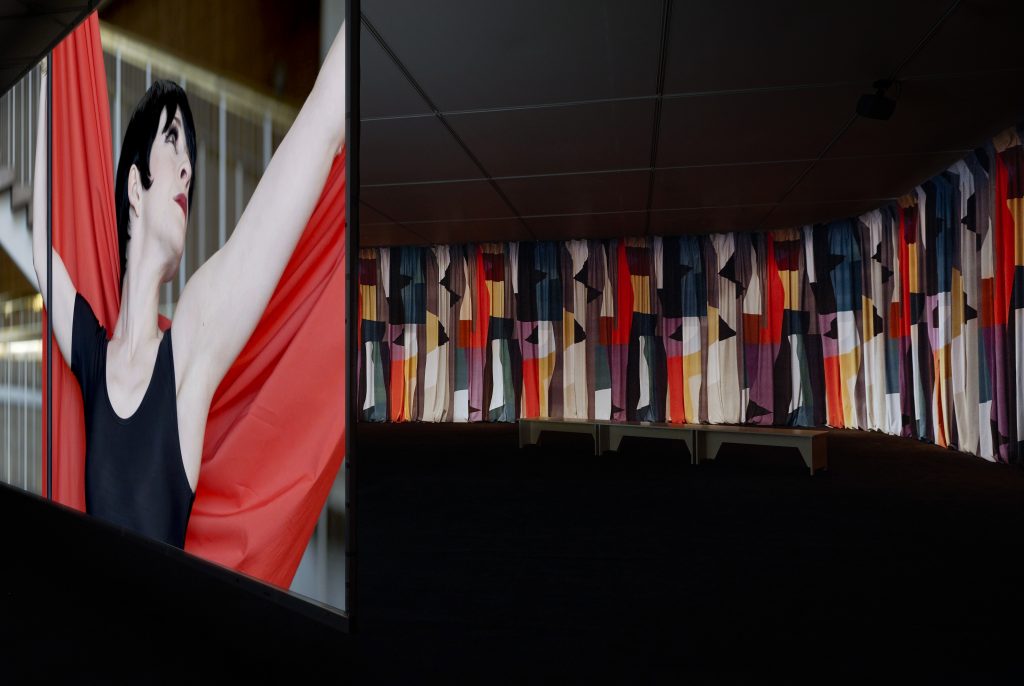 Looked at one way, ‘nada’ is the Croatian word for ‘hope’. Looked at another way, it’s Spanish/common English slang for ‘nothing’. Cibic’s films enact the tension between ‘hope’ and ‘nothingness’ out of which the Nation State emerges, at once tangibly real (actual bits of earth) and also arbitrary, abstract (borders drawn on maps, the ‘feeling’ of ‘being’, say, ‘British’).

Looked at one way, ‘Nala’ in The Lion King trilogy is an embodiment of The Nation – Simba’s romance-narrative in ‘attaining’ his Queen being a metaphor for his development towards adulthood and kingship. In Hamlet, Ophelia can be read as similarly passive, her madness and offstage-death a tragic product of the woman-as-symbol trope brutally enacted upon a human being. In the Nada trilogy, Cibic is unflinching in her critique of the objectification and commodification of the female body within the male-dominated body-politic.

“…people are always satisfied with the Exhibition. In the end…”

In the end, the machinations of the State always take place backstage, and we the people must be satisfied with the display. “In the end, people are always satisfied with the exhibition”, says the sinister curator-character in ‘Nada: Act III’. You don’t know the half of it. In a dark, soft space somewhere between the stage and oblivion, Jasmina Cibic shows us the shadowy work of power and resistance. It’s a tense and neurotic show, researched to an intimidating depth and breadth, its fingers on several waning pulses. It’s fascinated by fictions, absolutely committed to truth. I just can’t wait to see it again.

Adam Heardman is a poet and writer based in Newcastle upon Tyne. 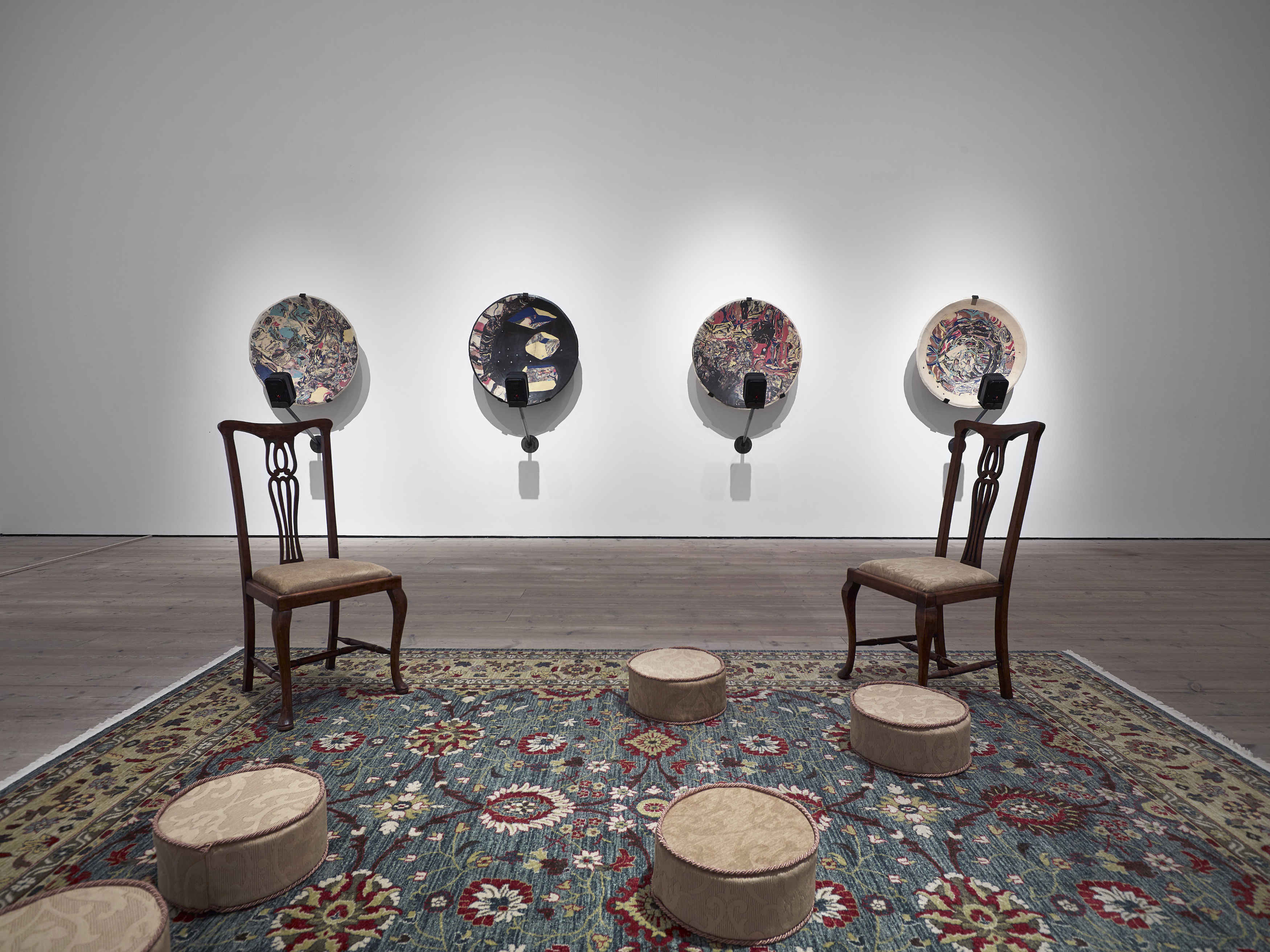