Jim Shaw is one of America’s most prolific living artists, yet one relatively unknown on British soil. This survey exhibition is the largest collection of his works to be shown in the UK to date, spanning nearly four decades of his perpetually changing oeuvre.

A child of the 1960s and graduate of cult LA school CalArts, Shaw takes references from high-brow politics, religion and art history and blends them with comics, pulp fiction, commercials and sci-fi, layering reference upon reference that can at first appear cryptically random, but on deeper inspection come together in a bizarre and uncanny state of ‘Americana’.

Take the body of work My Mirage for example. This 170 part series works like a deconstructed novel, loosely following the main protagonist – a religiously brought up Middle-American boy named Billy – as he encounters awkward growing years, psychedelic college awakening in which he follows a woman into a cult, and his later return to the religion of his youth as a preacher. Each piece of the series is rendered in a different popular graphic style of the 1960s, from Dr. Seuss to superhero comics to Hanna-Barbera style animation and rock album covers, with references to fine art history thrown into the mix. It makes for fascinating viewing despite its incomplete narrative (the works are rarely shown in their entirety and are never in strict order) and viewers will find themselves drawn to minute details that make reference not just to the story of Billy, but to societal and political changes of the decade too.

Equally engaging are his series of works based around his dreams, including stilted pencil drawings, paintings of imagined paperback covers and ‘dream object’ sculptures. Shaw’s knack of consolidating bizarre and fluctuating dreams within one narrative piece perhaps comes from his post-university experience as a TV story-boarder. As unashamedly weird as the dream imagery appears, in his simple allegories they seem to somehow make sense – the vast references in all of them a dormant reflection of the artist’s conscious mind.

Harder to get your head around is Shaw’s made-up religion ‘Oism’. This sprawling project of sacred narrative, movement, propaganda and rock opera (yes you read right) has propelled many of his more recent works. The series of abstract paintings depicting figures from the created scripture seem a little self-indulgent and are much less immediate, though are undeniably well detailed and highlight a real positive to viewing this exhibition – that, should you not want to delve into the intricacies of it all, the sheer craftsmanship of the work can still be appreciated.

Having said that Oism has produced some of Shaw’s more difficult work, it has also spawned what in my view could be his best. The vast theatre backdrop paintings of the Left Behind series fill the cavernous level four space at BALTIC, confronting you with their anarchistic stars and stripes, zombies and Oist apocalypse scenes as soon as you step over the gallery threshold. In their larger-than-life scale they consume you as a viewer, offering an immersive experience of Shaw’s sprawling interests. This seems fitting, as much of the work seems to reflect a human desire for escapism – whether it be through religion, commodities, pop culture or dreams – and in being sucked into Shaw’s ‘Rinse Cycle’, you can experience a brief escape from reality too.

Jim Shaw: The Rinse Cycle is on display at BALTIC Centre for Contemporary Art 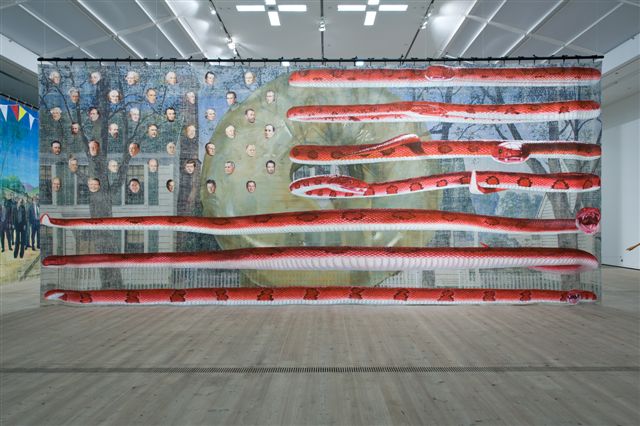 Rebecca Travis is an artist, curator and writer based in Newcastle.