‘A Soft Rebellion in Paradise’ is artist Chloë Brown’s most ambitious project to date. Involving over two hundred female collaborators drawn from an open call-out to women across the city of Sheffield, Brown’s ‘Soft Rebellion’ involved gathering these women in Paradise Square to make their voices heard loud and clear. This is a review of the artist’s film that resulted from this action, which was screened at Doc/Fest on 8 June 2019. Nothing short of a choreography of pure emotion- the film is the voluminous expression of the collective agency of women, taking on a particular poignancy in light of our raised consciousness, post-Me Too.

Standing on the cobbled streets of Paradise Square in Sheffield, a huge projector screen looms large – the two speakers flanking it emitting a chorus of women’s voices united in a single bellowing shout:

We push back silence to tell.”

On the screen I see row after row of women, of all ages and skin tones. They look like a fierce, immovable, unstoppable force. The camera pans along the faces of each of these women, lingering for micro-seconds longer on the more animated faces. Shown in the moment of a full-throated and full-bodied roar; the kind that reverberates through stomach to throat, shuddering the vocal chords. Flying out from tongue and lips with an expulsive force, projected or catapulted out from their bodies. This is the ‘voice’, as philosopher Mladen Dolar describes it, like ‘a body missile which has detached itself from its source, emancipated itself, yet remains corporeal.’[1]

The visceral nature of the corporeal is something that Brown does not flinch from. Zooming in on the wet fleshy lining of the mouth, as it forms around each word, each syllable. Like a cavernous orifice that both draws you in and simultaneously repels you. The voices are projected with such power that a fine mist of saliva follows shortly behind. It is impossible to look away. The disembodied mouth shots call to mind Samuel Beckett’s 1973 play Not I -a single monologue delivered by an actress, whose mouth is the only part of her visible to the audience. Whereas Beckett’s words were uttered through relentlessly chattering teeth, a stream-of-consciousness evoking a state of hysteria bordering on psychosis. In Brown’s film, the words spoken are those of poet Geraldine Monk, written specially for the work, ventriloquised through the mouthpieces of a choir of women. This is speech with intent, perhaps malevolent intent. The tonal effect is akin to the witches in Macbeth, reciting onomatopoeic utterances in unison – ‘Our whinnies and whickers. Our twangs and whiffles.’ The chorus weaves an intoxicating atmosphere of unease and portent.

The floating mouths speak of animalistic noises. It is horses and cattle that ‘bray’ and ‘whinny’ not people. After speaking to Brown, I discover that the lauded American novelist Henry James used these descriptors to decry women’s speech. In 1906 calling the sound of women’s’ voices ‘a tongueless slobber or snarl of whine’; akin to ‘the moo of the cow, the bray of the ass, and the bark of the dog.’[2] To contemporary ears, the barefaced misogyny of this statement (published in Harper’s Bazaar– a women’s fashion magazine) may shock, yet many modern-day parallels are to be found. Classicist scholar Mary Beard charts the long history over two millennia of taboos and prejudice connected to women’s speech in her feminist manifesto ‘Women and Power’ (2017). Beard was of course subjected herself to vitriol and horrifying sexual taunts from internet trolls after appearing in the public eye with a number of high-profile television and radio programmes. Beard’s manifesto was a key text for both Brown and her poet collaborator Geraldine Monk; kindling their desire to stage a ‘rebellion’; a clear act of resistance through the raising of the female voice/s in a public space.

The title, and to a large extent the spirit, of ‘A Soft Rebellion in Paradise’, is both explicitly feminist and geographically specific. Enacted in Paradise Square, a cobbled public area once the crucible for civil unrest and political demonstrations; it is now flanked by Georgian terraces housing legal firms. The law is of course still a profession that has not managed to establish gender parity among its upper ranks. The story of radicalism and collective action in Sheffield has been described as beginning and ending in Paradise Square. It was the place where all major political meetings were held, and was also the site of Chartist silent protests in 1839; a working class movement agitating for social reform. At one poignant moment in the film, the women place their hands over their mouths and stare forcefully at the camera; a direct homage to their Chartist ancestors and a nod to the historical silencing of women’s voices.

With the work, Brown also draws attention to little known fact, that Sheffield has the distinction of being the first known place in the country to have formed a women’s suffrage society run by women for women – The Sheffield Women’s Political Association (in 1851). Knowing this, Brown became obsessed with finding pictorial evidence of these women occupying and speaking out in Paradise Square. Her search was unfruitful; however, she made a fortuitous discovery of an undated image in a local history book of the square. 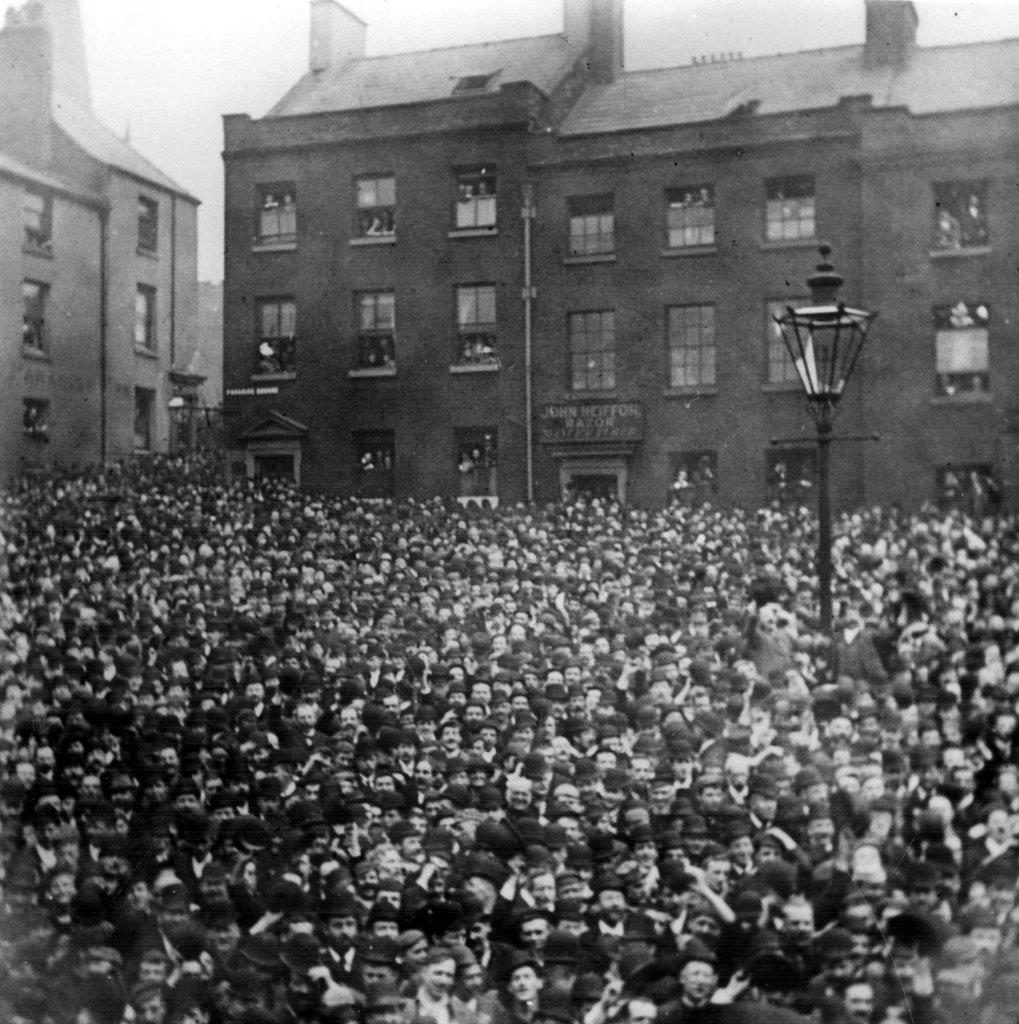 Photograph of men gathering on Paradise Square in Sheffield. Date unknown. Women are just visible in the windows of No. 1 Paradise Square. Image courtesy of Sheffield Libraries and Archives.

First appearances were of a monochrome sea of men’s faces in bowler hats, gathered for some undisclosed public event or protest. But what caught her eye was the tiny faces of women and girls looking on from the windows of No.1 Paradise Square, a home for women ‘in moral danger’ and poor women and girls who were trained in domestic servitude. Many were women who were described at the time as having ‘sown their wild oats’ and gotten pregnant outside of wedlock[3]. ‘Soft Rebellion’ is a literal inversion of this image; with Brown taking the women out from behind their glass containment, into the square, and right into the action.

There is a kind of territorial dispute embedded in the raising of these women’s voices- shouting, itself, an act that incites collective experiences. Brown talked about one of the unpredicted outcomes from this action being the camaraderie and solidarity felt by many of the women participants, who were reunited again for the premiere of the film screening at Doc/Fest. The emotion of the event was palpable, with women who had previously been strangers before the project started – now hugging and greeting each other as comrades in arms. In Brown’s words: ‘the performance really resonated with many of the women as an act of activism.’ 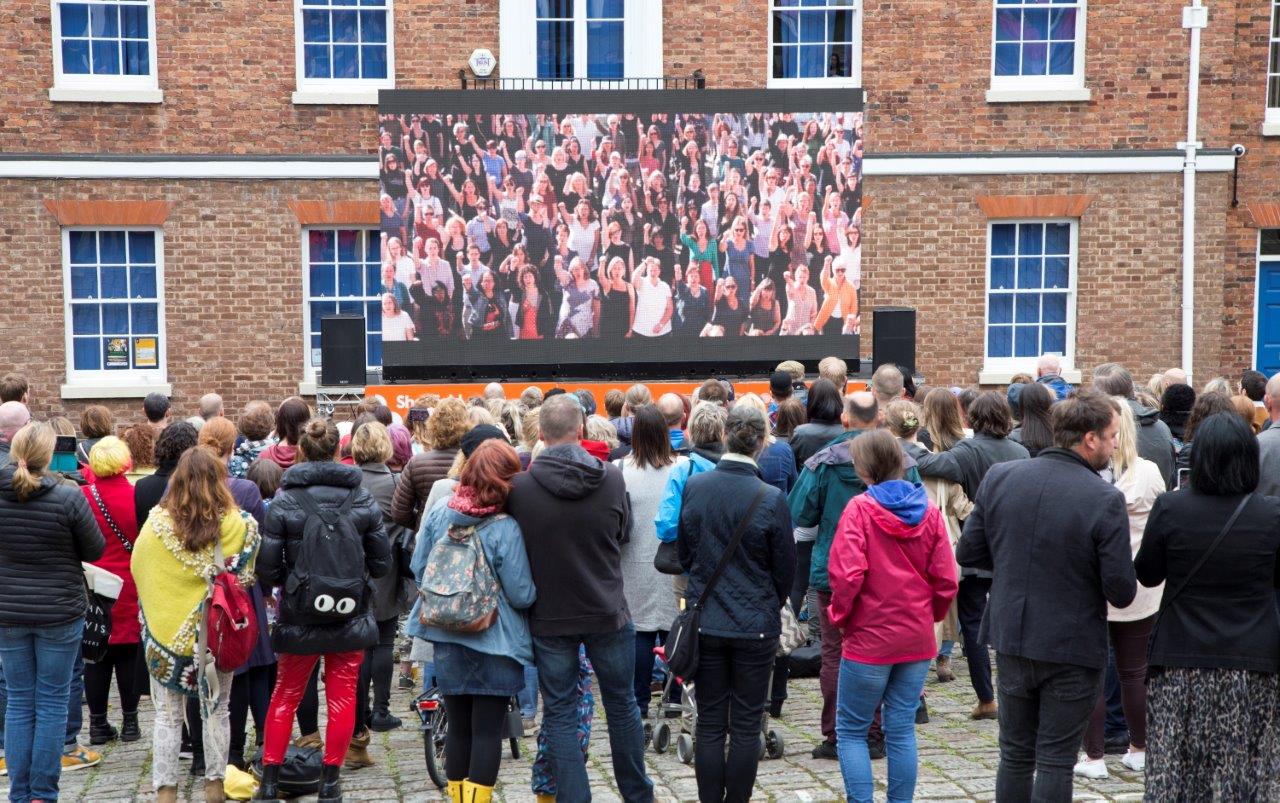 Photograph of the screening of ‘A Soft Rebellion in Paradise’ as part of Doc/Fest, Sheffield, 8 June 2019. The screening was attended by 1300 visitors including many of the participants and their friends and family. Photograph: Jacqui Bellamy.

The film constitutes the most ambitious collaborative project of Brown’s to date and is the latest in the line of her ‘soft rebellions’- a series of actions and events that involve dancing, eating, talking and applauding in places where it’s considered inappropriate to do so. In particular, places of patriarchal power – such as an all-female supper in 2013 held in the hallowed halls of the world’s largest Masonic Temple in Detroit (a site of secretive, exclusively male authority). Brown recognises that speech in such a context is a political act- the female voice intervening with great resonance within the power dynamics of particular structures – linguistic, governmental, pedagogic, legal, religious. Thus calling attention to itself and to its historical silencing and underrepresentation.

Deserving of a mention is Lia Haye’s editing, a masterclass in building momentum and tension, she creates a rhythm from looped footage, punctuated by moments of silence and culminating in a powerful crescendo. The propulsive soundtrack, provided by musical collaborator Die Hexen (translated from German as The Witches)-  a.k.a. electronic composer Dianne Lucille Campbell, lends the film an urgency and dynamic cinematic quality.

As an evolution of Brown’s ‘Soft Rebellions’ this work signifies a huge leap forward in her practice, and is characterised by a greater expansiveness, generosity and reach. Through Brown’s film and the vocalisations of these two hundred women, Paradise Square is transformed into a temporary Utopian space – bringing us into direct communion with the power and agency of the female voice.

‘A Soft Rebellion in Paradise’ had its international premiere at Doc/Fest on 8 June 2019. It was commissioned by Making Ways: a programme supported by Sheffield Culture Consortium through Arts Council England.

This review was written by Holly Grange, curator and writer based between Manchester and Leeds.

[3] Compiled by the Sheffield & District FHS members for Sheffield Archives. Available at: https://www.sheffieldhistory.co.uk/forums/topic/6534-paradise-square/page/2/ [Accessed on 10/06/2019]