Tim Etchells’ work includes neon, sound, performance and drawing, but text is always at its heart. He uses playful and poetic language to draw out properties of the physical, social and political landscape in which his work is situated, an approach that is particularly apparent in his public work.

He currently has two public commissions on view: ‘With/Against’ (2018), a neon piece commissioned by the BALTIC Centre for Contemporary Art as part of the Great Exhibition of the North, and ‘Everything is Lost’ (2018) a stainless steel piece presented by VITRINE at Frieze Sculpture 2018. In both works, we see him draw out the ambiguous properties of language to disrupt familiar phrases. In doing so, he probes deeper into the place, space and moment in which the viewer encounters his piece.

Alongside his art practice, he is the Artistic Director of Forced Entertainment, a Sheffield-based experimental theatre company, with whom he has produced an extensive body of collaborative performances, including, most recently, ‘Out of Order’, which premiered on 27 April 2018, at Bockenheimer Depot, Frankfurt.

For this conversation with Susie Pentelow, Etchells speaks about his current and future projects, highlighting the threads that run through his entire practice.

Corridor8: You work across a diverse spectrum of spaces — from gallery to stage, public space to paper. Do you find there are similarities in the ways you approach these?

Tim Etchells: Yes, I think so. I am always trying to understand the nature of the contract you can establish with a viewer in a particular context. If you can understand that — what the possibilities and limits of the situation are — you can make a work that speaks intelligently into the context. I’m always keen to understand the formal structures and the nature of the relationship to an object or a work in a particular context. In essence, you’re performing a calculation: ‘What is this space? How does it work, historically and in more pragmatic dynamic terms? What does it allow me to do? What are the limits I need to negotiate or try to break through?’ Any of these contexts allow you to do something quite different, but the calculations you make about the work itself are very similar.

One of the things I like about working across all these mediums is that it allows me to reach viewers in a variety of different ways. At the extreme end, a novel is very different to a neon sign, and a neon sign on top of a building is very different to an intimate show in a gallery or a performance lasting six hours. Each of those allows you to approach people in different ways, and that’s what interests me — the chance to make a connection, to get under people’s skin or get past their defences. 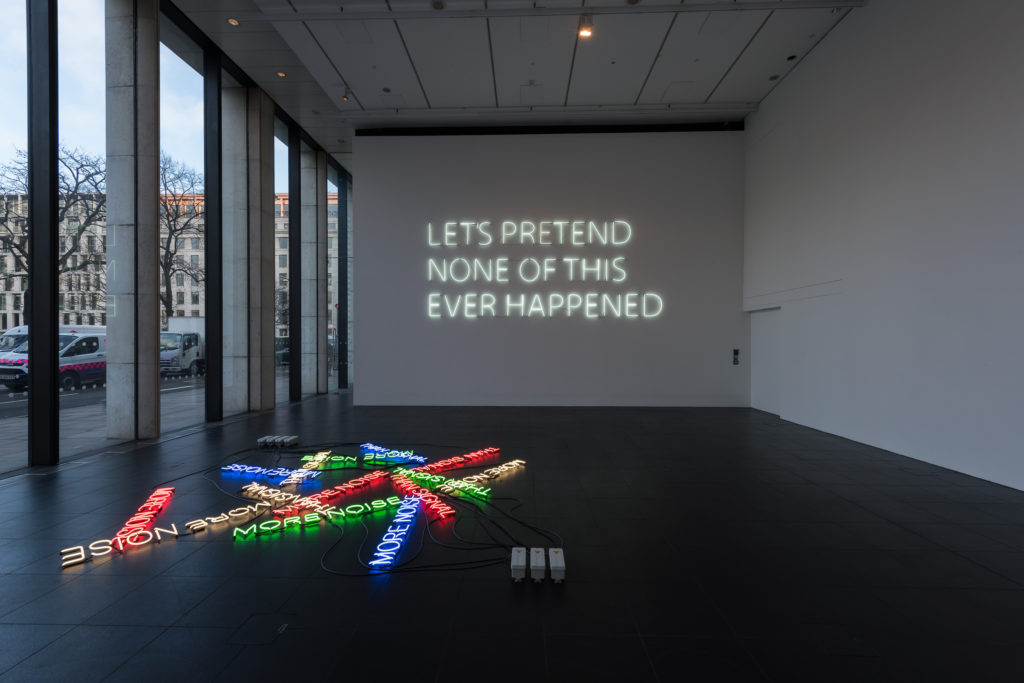 C8: The last time I interviewed you, you said ‘whatever context I’m working in… I always come back around to text, spoken or written’. Could you talk about your relationship with, or differences between, your use of language in theatre production and in your art practice?

TE: The big difference for me is between anything involving speaking or voice and anything that involves a physical manifestation of text — whether that’s a neon sign or a book. When you speak, it’s temporary, it’s provisional, and it’s socially triangulated. Whereas when you make a book, a neon sign or a drawing, the object persists in one’s absence. It’s still a fluid thing of course — objects are still in time, albeit in a different way — but they don’t have the same ephemerality that speech usually has. So I’m aware of that difference — it feels quite important.

Another thing in regard to performance and speaking is that you’re always talking about people being present, which means there’s a socially negotiated element to the communication: it’s the words, but they’re part of a much more complicated transaction that goes on between the parties. On the other hand, when someone encounters a neon work or a novel of mine, I’m not present. The work speaks for itself. Looking at a drawing in a gallery or a sculpture on a building, your negotiation is not with me personally, but with the semantics or the appearance of the thing. It’s not that I find one of these scenarios better or worse than the other, just that they allow for quite different things to happen.

C8: Your work ‘With/Against’ is currently installed beside BALTIC as part of the Great Exhibition of the North. This work feels site sensitive, in that it acts as a point of connection between Gateshead Quayside and Newcastle Waterfront. To what degree was this work developed in relation to its setting?

TE: Very much so. Visiting Gateshead, I was really drawn to the riverbank and struck by the view from Newcastle, looking over to the opposite side. The massive concrete wall, which shores up a car park by BALTIC, was soon a favourite site for me; the location was clear even before I’d decided on the work.

I did a load of reading around Newcastle and Gateshead — not in any structured way  —  from industrial history to popular music, just looking for clues really.  As I went through the process I focused increasingly on the river and somehow came up with those two contradictory phrases: “Go with the flow / Swim against the tide”. I had been thinking about the North and the sense of political and even social otherness there that resists incorporation into other images of Englishness. I was also thinking about this idea of going with the flow, of being fine whatever happens. There’s a kind of irrepressible energy in that which is also a key survival tactic in the North. And I was thinking about “swim against the tide”: of course — the idea of resistance, contrariness, the possibility to push in another direction. The friction between those phrases felt relevant to me and it made a kind of local sense.

I think the work could stand somewhere else, but there’s no doubt its genesis was deeply connected to this particular place. Often, works are conceived for particular contexts or places but do get shown elsewhere later. Wherever you put them, though, works spring into a dialogue with other forces in a new location. I often talk about the neon and LED works as being somehow ‘porous to context’. They’re not finished things, they’re fragments of language, questions or statements that are sensitive to other forces in the air, whether connected to location or to the person who comes to see the work.

C8: Your work ‘Everything is Lost’, which is currently installed in Frieze Sculpture Park, explores language breaking down or becoming disorganized — and in doing so, the language acts out its content. Can you talk about how this work developed?

TE: This piece started as a proposal for an outside work. I was playing with rearranging letters on a grid and looking at various different phrases and what happened when you messed them about – with complete unintelligibility at one end of the spectrum and complete legibility at the other.

One of the phrases I was drawn to was, “Everything is lost”, which I like because it refers to the loss or fragmentation of meaning, which is present in the work, of course. I also liked that phrase as a poetic and slightly melodramatic pronouncement about the contemporary moment! I don’t think I’d make a work that just said very straightforwardly “Everything is lost”. But with the language disrupted as it is, there’s a kind of tension I find useful.

C8: You have a solo exhibition coming up at VITRINE, London. What are your plans for this show?

TE: Again, I’m thinking about playing between the semantics of a phrase and that same phrase as disrupted sense, or simply as pattern. I’m always collecting bits of language that fascinate me. The fragment I want to use for this new work came from James Bridle, an artist and a thinker around politics, new technology and the network. There’s a line in his recent book New Dark Age that reads ‘for everything that is shown something is hidden’. He’s talking about the relative transparency of networks and information in terms of what you can access nowadays via the Internet. But he’s also pointing to the fact that for all the supposed transparency, there is also always something else that’s being buried.

I had the idea to make a neon from that phrase, but to only illuminate fifty percent of the letters on a one-on, one-off basis. So every letter is there as glass, but only half of them are illuminated. The phrase will only be intelligible if you look at both what’s presented and what’s (sort of) hidden. I’m drawn to this paradox of the visible and the invisible. In this case, if you only look at the illuminated letters the work will be unintelligible — but if you look closely, then another level of meaning will be apparent. I’m really excited to make and present something like that for public space.

C8: The correlation between seen and unseen makes me think about writing, and how much of the process is private versus the finished public piece. What is your editing process like?

TE: On one level, I see my work with language mainly as a process of collecting — collecting stuff from newspapers, stuff overheard on the bus; stuff people say on the street; stuff I have randomly thought. I’m building up a notebook all the time, which is full of disconnected fragments. Editing, in that context, is about going through that collected material later and trying to see what’s useful or interesting to pursue. Some things I write down one day and ten years later, they’re still there unused! Other things immediately go from the notebook and bounce right into a performance or a drawing. It’s collecting and sifting.

‘With/Against’ is currently installed beside BALTIC Centre for Contemporary Art and above South Shore Road in Gateshead, where it will be viewable until 28 August 2018 as part of the Great Exhibition of the North.

‘Everything is Lost’, presented by VITRINE at Frieze Sculpture 2018, can be viewed in Regent’s Park London until 7 October 2018.

Tim Etchells has an upcoming solo exhibition at VITRINE, London, which will open on 1 October 2018 and will continue until 8 December 2018.

Find out more about Tim Etchells’ work on his website.

Susie Pentelow is an artist and writer based in Providence, RI, USA and London, UK.

Published 15.08.2018 by Christopher Little in Interviews

Matt Stokes: Gogmagog – The Voices of the Bells