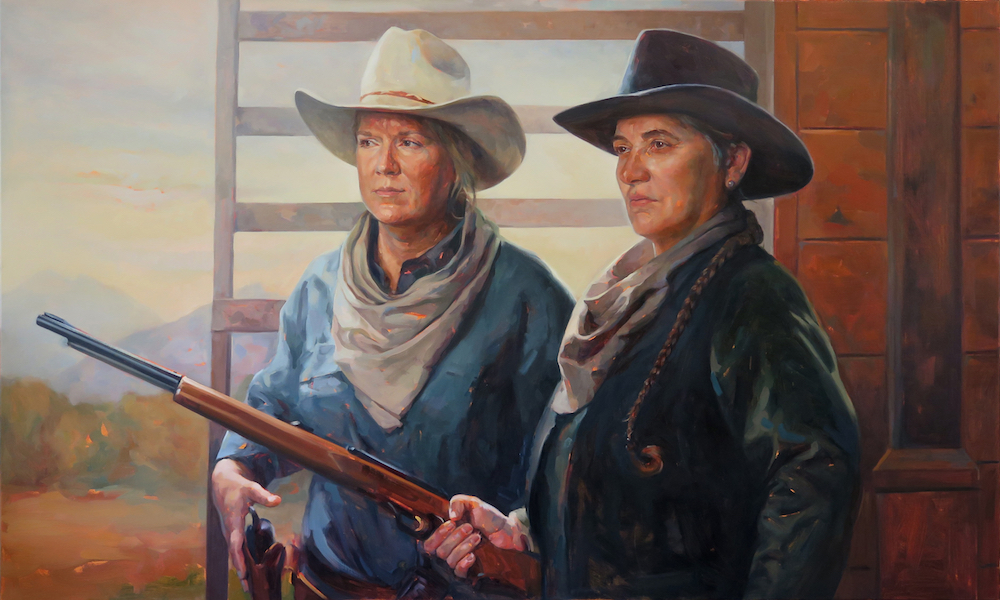 Browsing an eccentric online glossary called ‘CowboyShowcase.com’, I find that the authors reject the term ‘cowgirl’ in favour of ‘cowboy’ as a catch-all term for anyone who takes on the role. A quick online search and I can guess why. Google’s top hit for ‘cowgirl’ is titled ‘Top 40 sex positions’. So, what then do we call a woman who is a cowboy? What can we say without immediately calling to mind highly stereotypical and sexualised images? The problem is that ‘cowboy’ technically excludes all who are not men. It oozes masculinity and bravado. It stares us down, shouting: ‘You can’t be a cowboy without the boy!’

Felice House takes on this problem with skilful dexterity. Her series of large-scale figurative paintings and drawings, Re/Western, examines the American frontier and the Western film genre from a contemporary, and markedly feminist, perspective. Familiar scenes from classic Western films are evoked and then transfigured on her canvases. Clint Eastwood is replaced by Virginia Schmidt, John Wayne by Liakesha Caro and James Dean by Stasha Kraguljac.

The portraits in Re/Western draw on familiar scenes but recast the classic cowboy hero and celebrity icon as women, and replace the film medium with paint. This is less a queering of the Western genre than an investigation of the possibility of women being lead protagonists – a re-gendering of the hero. This is no mean feat in a culture that casually asserts that masculinity as the only viable form of heroism. The paintings, however, go beyond facsimile or a simple case of gender flipping. Through a series of appropriations and anachronisms, House presents an uncanny, humorous and deeply political reinterpretation of the classic Western.

Planning the portraits, House placed an advertisement on Craigslist. Many women answered her call, and some came to model for her. Next came a period of testing costumes, poses and facial expressions with different individuals, trying to work out, for example, what exactly makes Eastwood’s scowl so evocative and how to reinterpret it. House describes the way the project developed as a tale of transformation. The process of each woman taking on an iconic cowboy role required a level of experimentation and negotiation between artist and model.

This aspect of recasting recalls an interesting project by Spanish artist duo Cabello/Carcellor. In their 2004 video ‘Casting: James Dean (Rebel Without a Cause)’, sixteen women take on the role of James Dean, performing his masculinity from individual perspectives. The resulting research examines the penetrating and influential models of masculinity and queering that underpin such representations. House’s portraits do something similar but with an important difference. I would argue the women do not so much play at being men, but play at being heroes. Rather than a woman acting like John Wayne, the paintings ask a hypothetical question: what if John Wayne were a woman?

What is so interesting is that while the women do portray heroes played by men in classic films, they also become their own character in the scenes. They are not playing at being cowboys, they are becoming cowboys. If the painting mimes the film-still, the models mine, rather than mime, the character of the cowboy for their own purposes. As women, they embody the cowboy-as-icon as a way of situating themselves as rightful players in the story.

The painting ‘Virginia Eastwood in The Good, The Bad and the Ugly’ (2013) is a good example of this strategy. The iconic poncho worn by Virginia instantly connotes Clint Eastwood’s ‘man with no name’. Thus, the painting re-presents an iconic scene but with important distinctions in terms of medium (oil paint) and subject (a woman). Unlike her counterpart’s character, Virginia has a name and she offers her own version of a steely gaze. Our eyes are drawn to hers, her expression cinematically framed between her hat and the top line of her poncho. Her features and hair are described with painterly, textured modulations, the brightness of her eyes echoed in similar tones across the canvas. The blue sky in the far right is balanced by the deep ochre landscape and the rich colour of her hair. The connections of colour and texture help to situate her in and connect her to the landscape, allowing us to read her autonomy and acknowledge her character: she is the lead character of her own story. You stop looking for Eastwood’s scowl once your eyes meet hers, at which point she becomes Virginia.

Felice House, ‘Virginia Eastwood in The Good, The Bad and the Ugly’ (2013), oil on canvas.

Re/Western is concerned with representation, agency and gender. Specifically, House is interested in working through the difficulties of thinking about women within masculine constructs; how they are constrained and how they resist and exceed their confines. The cowboy represents a particularly strong figure of masculinity. Whether as hero or anti-hero he embodies romanticised individualism, recklessness and rootlessness. Ideals of a certain kind of freedom — jingoistic, aggressive, unruly — are tantamount to his position.

Literature on the Western film genre draws a strong connection between Western film tropes and a certain version of US national identity. In 1893, historian Frederick Jackson Turner suggested in his ‘Frontier Thesis’ that American democracy was formed by the reality and myth of the American frontier. He argued that American consciousness is constantly oriented towards the next frontier, with a view to overtaking it. When the Western frontier literally ended, other (mainly metaphorical) frontiers appeared. We might, for example, consider the Space Race that began in the 1950s another episode in this saga. The icon of the cowboy, and his specific kind of masculinity, are reasserted in different guises. We only need to glance at the news to experience the chauvinistic, but nevertheless captivating, hyper-masculinity that has characterised the recent US presidential election. President Trump is a reckless, rogue businessman, beguiling and corralling his supporters to take back America’s frontiers all over again.

House’s forays into this deeply masculine arena constitute a highly political project. The popular culture references seem at first harmless, but each is imbued with deeply engrained assumptions of power and position. In choosing women subjects, House tests the conventions of the cowboy and how far they might stretch into more feminine (or feminist) territory. By firmly situating women as cowboys in a landscape that mimics classic films, she affirms their new, autonomous characters in the re-presented scenes. Thus, Re/Western makes visible some of the politics of gender. If we can think and see beyond the overdetermined masculine heroics in these films, what else is possible? This provokes further lines of questioning: what about the representation of and ethical relations with Native Americans, or conceptualisations of the landscape and nature that reflect cultural approaches to ecology? Whose stories still need to be told?

In the words of feminist theorist Donna Haraway, ‘it matters what stories we tell to tell other stories’.¹ In House’s work, it matters that we represent women as heroic, not because we need to define women as ‘good enough’ by a patriarchal standard, but because it enables a transformation of those standards from within. Re/Western does more than simply invert the gender binary, in part because modes of representation and regimes of power are not reducible to it. It seems to me that this is what makes House’s project so interesting. The paintings are approachable, but become more complex and difficult once you spend time with them.

Observing the exhibition, I could not help but paint my own picture in my mind. Although they are for the most part alone on each canvas, looking around you can easily imagine the women riding side by side on horseback into the sunset. You might even put yourself in the picture. This may be a cliché too far, especially when House’s work manages to eschew such platitudes. Nevertheless, this tempting vision, at once cinematic but not from any film I’ve seen, was one I was glad to be left with.

This essay was commissioned by Leeds College of Art as part of a Corridor8 writing residency in January 2017. It also features in a print catalogue, funded by Texas A&M University, designed by dust and printed by ASAP Digital Ltd.

Elspeth Mitchell is a writer and researcher based in Leeds.

All images courtesy of Felice House.