How relevant are the principles of the Bauhaus school for artists working today? This question lies at the heart of Construction House, a new programme of exhibitions and events at S1 Artspace that mark the centenary of the Bauhaus. Over the course of six months, eleven studio holders will adopt Bauhaus ideas and theories within their individual practice. The inaugural exhibition, Order & Limitations, which includes newly commissioned work from Roanna Wells, James Clarkson and Ashley Holmes, focuses on patterns, sequences and rules, and the ways that such parameters can influence artistic process. Think of it as an exploded diagram of each artist’s practice.

Although the artists are starkly different in their approach, one wall of the gallery consolidates some of the sources consulted during the development of the works, including archive materials, diagrams and extracts from Bauhaus essays. ‘One can never experience art through descriptions’, reads a quote by Lázló Moholy-Nagy. This is as good a summary as any of the movement’s staunchly pragmatic outlook, its distaste for artifice and empty aphorisms – but it doesn’t make the task of writing up the work any easier. Consider what follows, then, a simple introduction.

As an artist with a background in fabrics and textiles, pattern is already integral to the compositions of Roanna Wells. Here, she carries those elements into a series of watercolours titled ‘andacht zum kleinen (devotion to small things)’. While the paintings reflect Wells’ customary precision and attention to detail, they are also titled as phrases from Paul Klee’s Pedagogical Sketchbook from 1925. Klee’s collection of lecture notes present complex ideas about art in a didactic form alongside exercises for students to interpret. The first two paintings of Well’s series stem from the lines: ‘purely repetitive and therefore structural’ and ‘the purer the presentation of the grey, the narrower its reach’. Her regulated rows of paint and immaculate mark-making demonstrate a controlled restraint and hint at the exacting labour and discipline spent in their production. ‘Disturbed balance and its effect’, however, breaks from this studied precision, one of its lines veering off, an orchestrated glitch that disrupts the sequence. This break in the pattern pushes the viewer to read the painting from top to bottom, almost as though it were a text. The principles behind Klee’s notes have been applied as deliberately as the paint itself. 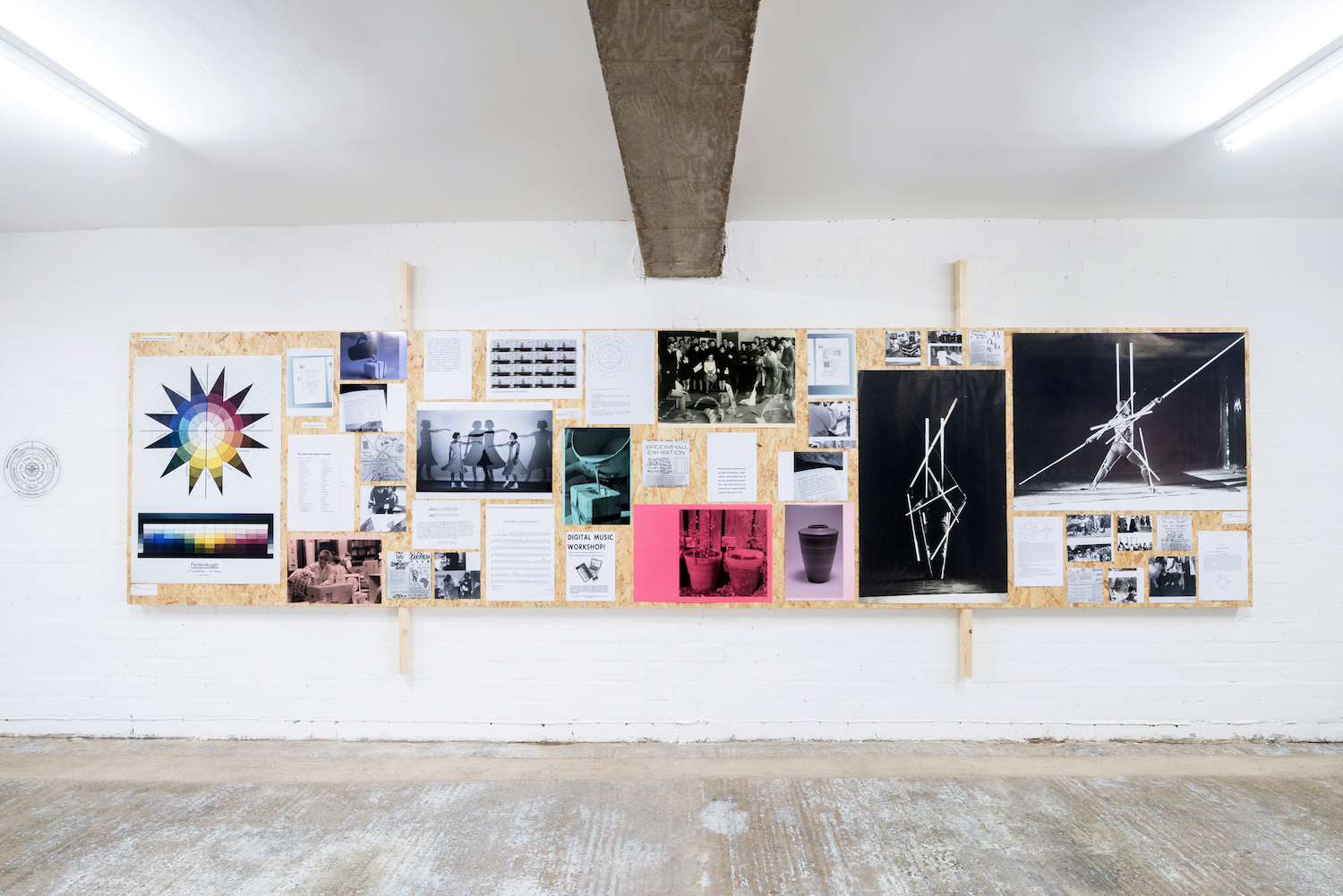 Elsewhere, there is a certain diffidence at play. The display of James Clarkson’s sculptures without fanfare through the space, exhibiting a utilitarian nature. ‘Drop Box’, for example, recreates the flattened nets of cardboard boxes in steel, while ‘Snigger’ is a series of ceramic waste bins cast from a classic IKEA ‘Fniss’ design. These forms appear so familiar that it is slightly disorientating to view them as sculpture, divorced from their original function. Just as Clarkson’s previous work has at times unpicked the brazenly aesthetic elements of manufacturing (‘A Painted Sun as a Yellow Spot’ from 2012 was a literal deconstruction of a Citroën Picasso), the works here also appraise industrial materials and objects in terms of their artistic potential, in line with the teachings of Bauhaus founder Walter Gropius. Indeed, a cardboard net explicitly suggests its own potential, waiting to be slotted into a more useful form. Over recent years, Clarkson stepped back from making art to pursue other projects, including setting up a clothing company – and it is evident that even during this hiatus, the experience of designing and manufacturing multiple copies of an archetype continued to influence his practice. The works on display here question the manner by which industrial production values can be incorporated into the development and duplication of an art work, as well as speculating on the relationships and associations that persist within an object even when removed from its original frame of reference.

Finally, ‘We’ll Clap For You’ by Ashley Holmes is an audio installation resulting from a series of workshops at the Broomhall Community Centre in Sheffield. As well as soundscapes produced by the artist and the young people he worked with, the recording integrates excerpts of a dialogue between Holmes and his grandfather about the experience of growing up in Jamaica before moving to the UK in the 1960s. The conversation touches upon the process of finding a role and purpose within a new community, and the significance of cultivating shared social spaces as part of that experience. As well as engaging with current visitors to the centre, the project was informed by an exploration into its history, with archive materials and flyers reproduced on the board. One reads: ‘Nothing to do? Nowhere to go? No money??? Fed up? So are we — and that’s why we want to do something about it!’. Another notice reflects on the success of a Racial Harmony Social, which appears to have gone very well except for an unfortunate musician called Tony Capstick who broke a guitar string and couldn’t perform. Vignettes such as these are vivid and spirited, reinforcing how crucial it is for people to work together to exploit the social potential of shared spaces. The inclusion of research materials is therefore more than a footnote to the work: it situates Holmes’ workshops as part of a longer-term collaborative practice. Even the poster for this workshop fits seamlessly among the older notices, as though the events were separated by days rather than years. This is not, however, a finished piece: further sequences will be added to the sound installation for as long as the workshops continue to run. 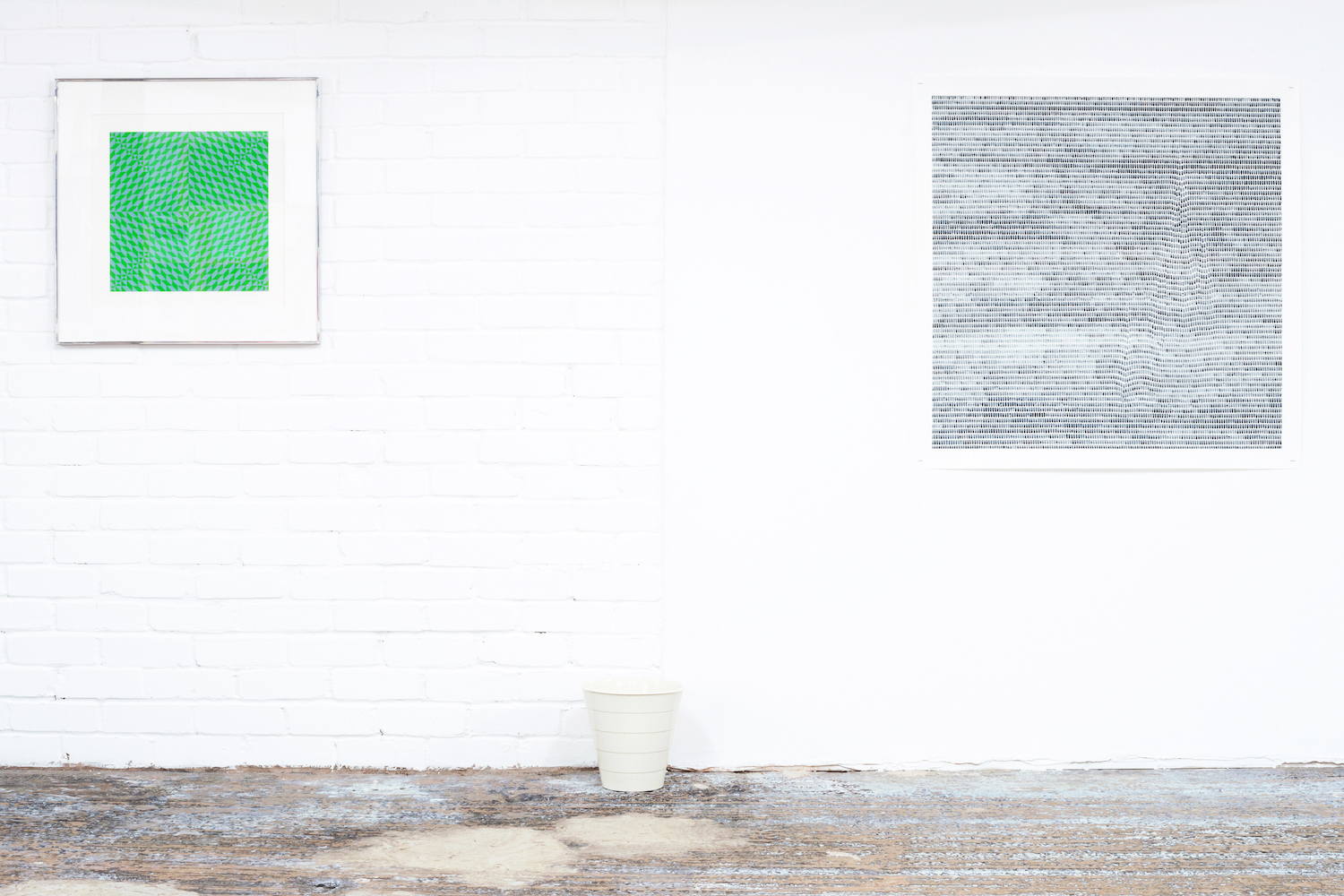 What emerges strongly from Order & Limitations is that the educational frameworks proposed by the Bauhaus still have a pertinent part to play in contemporary art, granting the artists license to approach their practice from a renewed perspective, to identify the patterns and sequences which animate their work. Despite the textbooks in glass cases and noticeboard full of theoretical maxims, the show is no dusty tribute to a bygone movement, but proof that its influence continues to be keenly felt. Since the featured artists all have studios in S1, there’s already a parity between their working environment and that of the Bauhaus school, and it is intriguing to watch the ideas of one arts collective being filtered through another. Two further exhibitions, Leisure Time and Radical Materials, are sure to build upon this strong foundation.